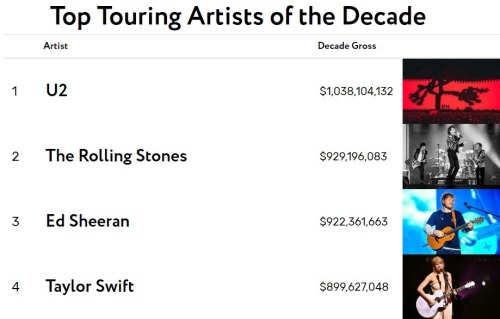 Pollstar’s Top Touring Artists of the Decade – No. 4: Taylor Swift

Taylor Swift started the 20-teens as a country princess but ended the decade as a pop queen; a touring juggernaut who will likely cross the $1 billion mark in ticket sales since 2010 soon after her upcoming “Lover Fest” dates launch in July.

Swift made the leap from playing arenas to stadiums, though she’d cut her teeth in them opening for George Strait in 2007. “Our tour started in January,” recalls TMG’s Louis Messina, who has booked tours for Swift since she was 17.

“George plays in the round. She walks up there, back then she used a head mic, and walks up the middle aisle and starts singing. Here’s this little 17-year-old girl singing about high school boyfriends, and being in love, getting her heart broken. And by the third song, she had that audience in the palm of her hand.”

Swift still does. Her subject matter has grown up and she is clearly master of her own universe now, selling out stadium tours and coming full circle in her mentor Strait’s footsteps. On her 2018 “Reputation” stadium tour, she sold out two shows Oct. 5-6 at AT&T Stadium in Arlington, Texas – where Strait famously broke attendance records in his “The Cowboy Rides Away” tour finale in 2014.

Pollstar about Taylor Swift’s ticket sales: Taylor Swift joins U2 as the only other artist in the 9-million-plus group, sporting an overall ticket tally of 9,014,173 during the decade time frame. She reached that number based on sales from all five of her headlining tours beginning with “Fearless” that ran from 2009 through 2010 (55% of that tour’s sold tickets fall in the decade time period). The “Speak Now” world tour (2011-12) was next, followed by ”Red” (2013-2014), her final jaunt as a primarily country headliner. She stepped up her game with “1989” (2015), including more stadium dates on the schedule than on previous tours, and then 2018’s “Reputation” tour with 2.8 million sold seats established her as a bona fide stadium headliner.