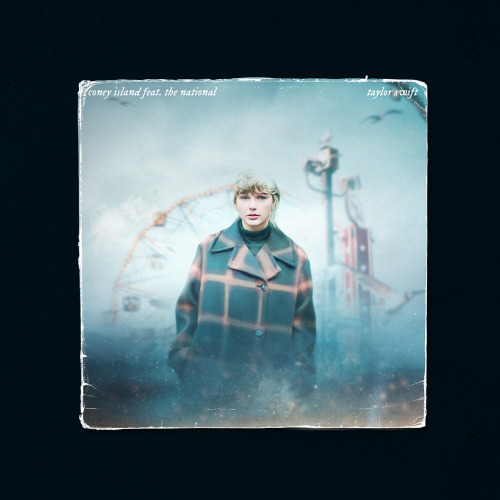 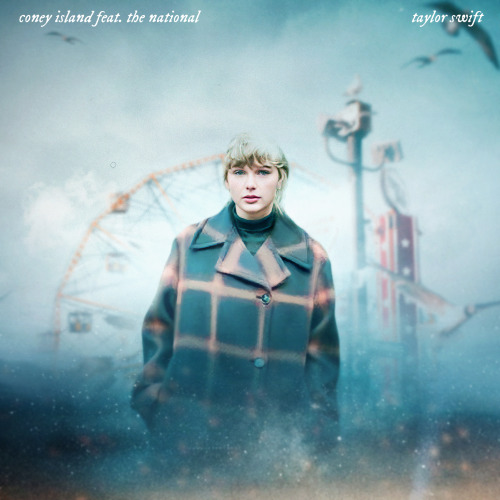 coney island, single concept 🌧️✨ (click for high quality)
and i’m sitting on a bench in coney island
wondering, “where did my baby go?”

Rain or shine, pandemic or riot, you better believe Taylor Swift is gonna release her new songs. The pop star, who seemingly hasn’t taken a break all year, gave us two more tracks from her folklore companion album evermore Wednesday night with the release of the deluxe edition on streaming platforms. The expanded album was previously only available in physical formats, making it the first time songs “right where you left me” and “it’s time to go” are available online. On “right where you left me,” above an old Taylor-reminiscent guitar twang, Swift sings about a relationship that has her dwelling on the past. “Did you ever hear about the girl who got frozen? / Time went on for everybody else / She won’t know it / She’s still 23 inside her fantasy / How it was supposed to be,” she sings while we frantically Google who Taylor Swift was dating at 23.

Over on “it’s time to go,” her words will be familiar to women who’ve had to walk out of relationships to save themselves. A few lyrics are so specific, however, fans see it as an aching response to losing her music rights to her former longtime label head Scott Borchetta of Big Machine and music manager Scooter Braun, who bought and sold her catalogue for over $300 million. “Fifteen years, 15 million tears / Begging ’til my knees bled / I gave it my all, he gave me nothing at all / Then wondered why I left / Now he sits on his throne in his palace of bones / Praying to his greed / He’s got my past frozen behind glass / But I’ve got me,” she declares. Taylor Swift spent the second half of 2020 creating two albums and rerecording her first five. These men are lucky they may have gotten away with a line in a bonus track, not a whole concept album fantasizing about their mysterious disappearances. No body, no crime.

afterglowings: I was at a party a couple of months ago and I…

afterglowings: I was at a party a couple of months ago and I…

I was at a party a couple of months ago and I had like two and a half mojitos, and then the next day, #DrunkTaylor was number one trending on Twitter. Because, you know, I go from zero to legitimately thinking I’m a wizard within, like, two drinks.

Folklore is the Biggest Album of 2020

Folklore is the Biggest Album of 2020

Taylor Swift’s surprise album takes Number One on the Year-End RS 200, as Lil Baby, Pop Smoke, The Weeknd and Juice WRLD finish in the top five.

We already declared Taylor Swift’s Folklore to be the Best Album of 2020. But until now, we had yet to hear from the numbers. Now, the numbers have spoken, the data has assembled into integers and decimal points, and the answer is in: Folklore is the biggest album of 2020, too.
Swift’s eighth studio album, which is one of two full-lengths she dropped in 2020, takes the Number One spot on Rolling Stone‘s Year-End Top 200 Albums Chart. In 2020, Folklore pulled in close to 2.3 million album-equivalent units.
Swift dropped Folklore in July by complete surprise — a rather un-Swift-ian thing to do — and subsequently broke a slew of RS Charts records — a very Swift-ian thing to do. Folklore saw the biggest sales week of 2020 — the biggest, in fact, since her 2019 LP Lover — and went on to break the RS 200 record for most consecutive weeks at Number One, with six straight weeks on top. Beyond its 1.1 billion on-demand audio streams, Folklore was the highest-selling album of the year, with over 1.2 million sales.

Overall, Swift has five albums on the year-end RS 200, with Lover coming in at Number 28 and Evermore at Number 63 despite being released in early December. 1989 and Reputation take Numbers 116 and 165, respectively. The only artist with more albums on the year-end chart is Drake, with six, led by Dark Lane Demo Tapes at Number 20.
Close behind Folklore at Number Two is My Turn, Lil Baby’s sophomore album that saw over 2.1 million album-equivalent units in 2020. But where Folklore was a big seller, most of My Turn’s units came from streams. All told, My Turn saw over 3 billion on-demand audio streams in 2020, nearly three times as many as Folklore. Lil Baby has been moving at breakneck speed since his 2017 mixtape Perfect Timing, seeing double-digit, sometimes triple-digit growth year over year. This year was no exception, as he saw a 71-percent increase in streams in 2020 compared to 2019. Compared to its predecessor, Harder Than Ever, My Turn was a far bigger charts success: Harder Than Ever was only the 27th most popular album of 2018, according to Alpha Data.

Third place in the year-end tally goes to Pop Smoke’s posthumous Shoot for the Stars Aim for the Moon, which pulled in just under 2 million album-equivalent units from its release in July through the end of 2020. The Weeknd’s After Hours and Juice WRLD’s posthumous Legends Never Die round out the Top Five.

The Rolling Stone 200 Albums chart tracks the most popular releases of the week in the United States. Entries are ranked by album units, a number that combines digital and physical album sales, digital song sales, and audio streams using a custom weighting system. The chart does not include passive listening such as terrestrial radio or digital radio. The Year-End Rolling Stone 200 Albums chart covers streams and sales from January 3rd, 2020, through December 31st, 2020.
While hip-hop continued to dominate the chart, accounting for close to half of its titles, this didn’t mark a notable increase from 2019. Hip-hop streams increased by 11 percent, which was lower than the overall 16 percent increase in streams. Pop also remained steady compared to 2019 on the year-end RS 200. The only two genres that saw a notable increase were Country and Latin, which makes sense when you consider that these were also the two genres — besides Easy Listening, New Age, and Children’s Music — that saw a year-on-year lift in streams larger than the overall lift in streams.
Luke Combs made an impressive showing on the year-end RS 200, with two albums in the top 20. His 2020 album What You See Is What You Get, led the way at Number Eight, while his debut This One’s For You takes 11th. (Year-end totals for both albums include the original releases and their deluxe reissues.) Morgan Wallen, meanwhile, had two albums on the chart, led by If I Know Me at Number 21. This year, 22 country albums landed on the year-end tally, up from 20 country albums in 2019.
Five Latin albums — four of which were Bad Bunny albums — made this year’s RS 200, up from last year’s two.
TOP ALBUMS — SALES
The top 10 looks much different, of course, when you look just at album sales. Here, Taylor Swift’s Folklore leads a far more pop-heavy list. After her surprise eighth studio album saw the biggest sales week of the year, it went on to see 1.2 million total sales in 2020. This is the second year in a row that Swift has had the highest-selling album of the year after 2019’s Lover. Evermore also sneaks onto the list, with 270,000.

The post Folklore is the Biggest Album of 2020 appeared first on Taylor Swift Web | Your Online Resource For Everything Taylor Swift.

While Taylor did not perform at this year’s Rockin’ Eve TV special, she did appear in a video message thanking frontline workers! You can watch the video here: