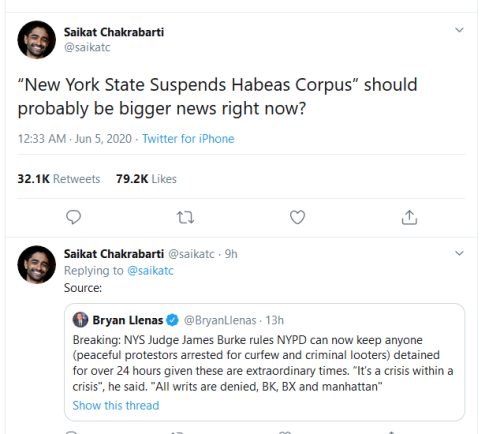 I don’t know a lot about US law, I will be honest, but this seems like yet another step towards the fascist dictatorship of Donald Trump.

It’s really tricky, because on the one hand, the Black Lives Matter movement is hugely important and I totally understand and respect their desire to keep their protests peaceful.

But on the other hand, I sort of feel like people should be rioting about this- because it’s fucking scary what is happening right now.

this is a huge fucking deal.

habeas corpus is meant to protect detainees by giving them right to report unlawful detention, and protects them against indefinite imprisonment – by suspending this, people can be detained without being given a reason, for however long. many protesters have been held for more than 24 hours; some have been held for up to 36.

those who have been released from detainment have said that detainees are being held without being given proper amount of water, soap or hand sanitizer, as hand sanitizer dispensers had been removed from holding cells, medical attention, or masks; many cops are not wearing masks. detainees are also being refused phone calls, giving families and lawyers no way to find them. (source, source)

the reasoning judge james burke gave for this was that, due to COVID, the pace of arraignments has slowed, as COVID has necessitated remote (virtual) hearings. however, multiple attorneys for Legal Aid (an nyc law firm that works specifically in cases where clients have been systemically neglected by the city) said that this was unacceptable, as the nypd has the resources necessary to arraign people faster, and that this was purposeful – due to a history of deliberately delaying arraignments because they “don’t like what they’re doing on the street,” and specifically now as the protests are targeting police brutality. (source, source)

detainees are being kept in cramped holding cells, filled to over capacity. they are being held in an enclosed space, often without masks as they had been taken away from them by police at their time of arrest; they can now be held indefinitely. the risk of infection is staggering. nypd’s assistant deputy commissioner stated, in an attempt to quell this issue, that protesters aren’t social distancing on the street – ignoring the fact that being outside with masks, with the room to social distance (barring instances of the police kettling, which, by the way, happened in the bronx last night) is a far cry from being detained indoors, en masse without immediate access to sanitizer, soap, and masks.

while these arrests include people who are acting violently, they also massively include people who are peacefully protesting past the 8pm curfew (including people sitting on their own front stoops). this is a low-level offense that does not necessitate detainment. in addition, cops are arresting food delivery people for being out past curfew, even though they are considered essential workers; delivery workers are overwhelmingly immigrants and people of color.

the gross misconduct of the nypd continues to escalate, and continues to be upheld by city officials who consider reports of police brutality, from journalists in the middle of these protests, “a different reality” than that seen from city hall. here’s looking at you, de blasio.

i’m not quite sure what this suspension of habeas corpus does to affect bail funds; but, here are a list of nyc-specific bail funds and organizations:

Brooklyn Bail Fund (note: they are not currently taking funds as their needs have been met.)